Fireworks on 9 May 2014 Cunard marked the tenth anniversary of the naming of its liner Queen Mary 2 with a visit by HRH the Duke of Edinburgh and a firework display, marking the start of her next voyage. I previously captured her when she was last in Southampton and didn’t want to miss this occasion.

My wife and I paid the modest fee of £1.60 apiece  to walk out onto Hythe Pier and found that it afforded us a great view of the festivities, with Queen Mary 2 and her sister liners Queen Victoria and Queen Elizabeth facing us. I had plenty of room to set up my camera on a tripod but groups of people walking past made the decking wobble, which wasn’t so good for long exposure photography. The tremors were even greater when the quaint little train that trundles down to the end of the pier and back rumbled past!

When shooting the fireworks, I found that I got best results by taking the shutter speed back to about 2 seconds, with ISO at 100 and aperture on F16, to get good starburst effects without over-exposure. I brought out detail in the scene – there wasn’t much – mainly via the Shadows slider in Lightroom back at home.

In these photos, Queen Mary 2 is obscured by the fireworks, which were let off from a barge; to her right are sister liners Queen Victoria and Queen Elizabeth. 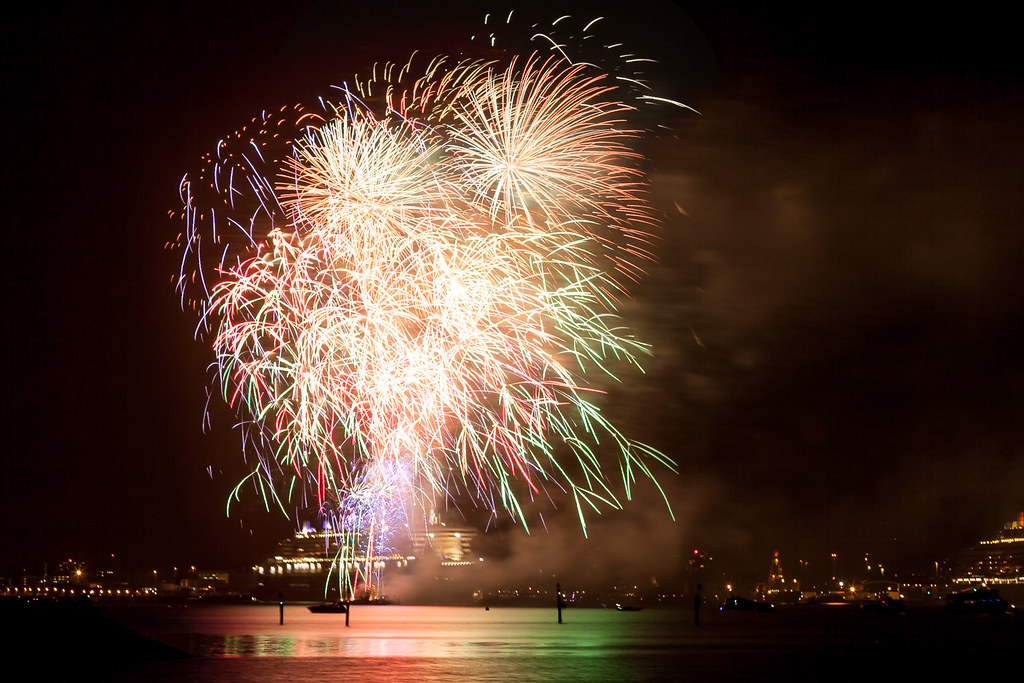 Fireworks and the birthday girl 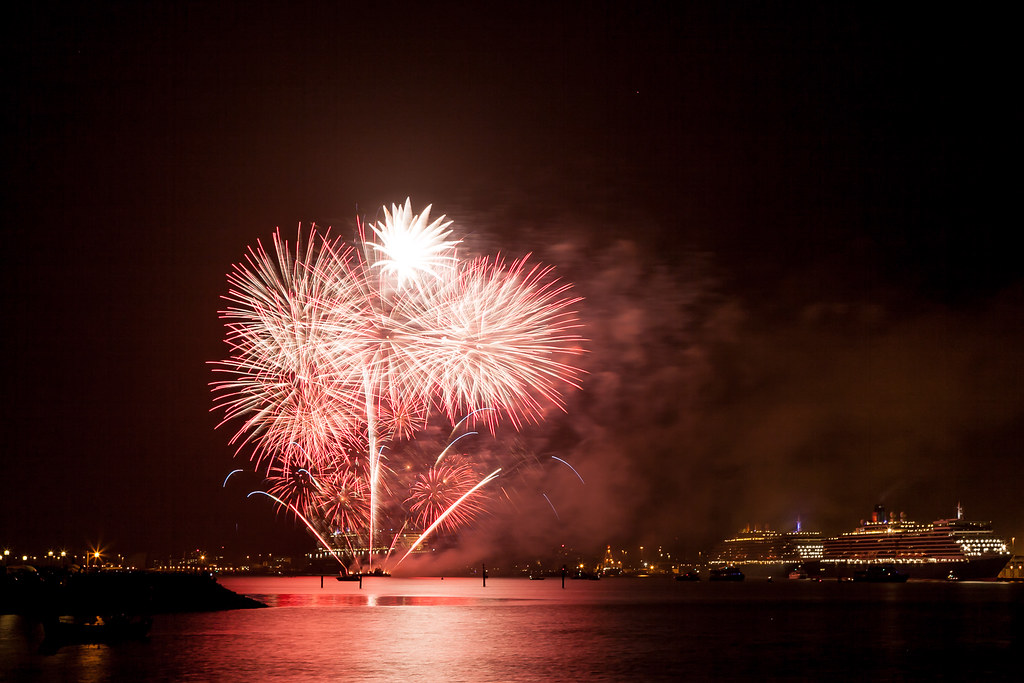 As the fireworks died away, they all sounded their foghorns – sounding like beasts in some primaeval swamp – and then Queen Elizabeth led them in convoy down Southampton Water to start their next respective cruises. 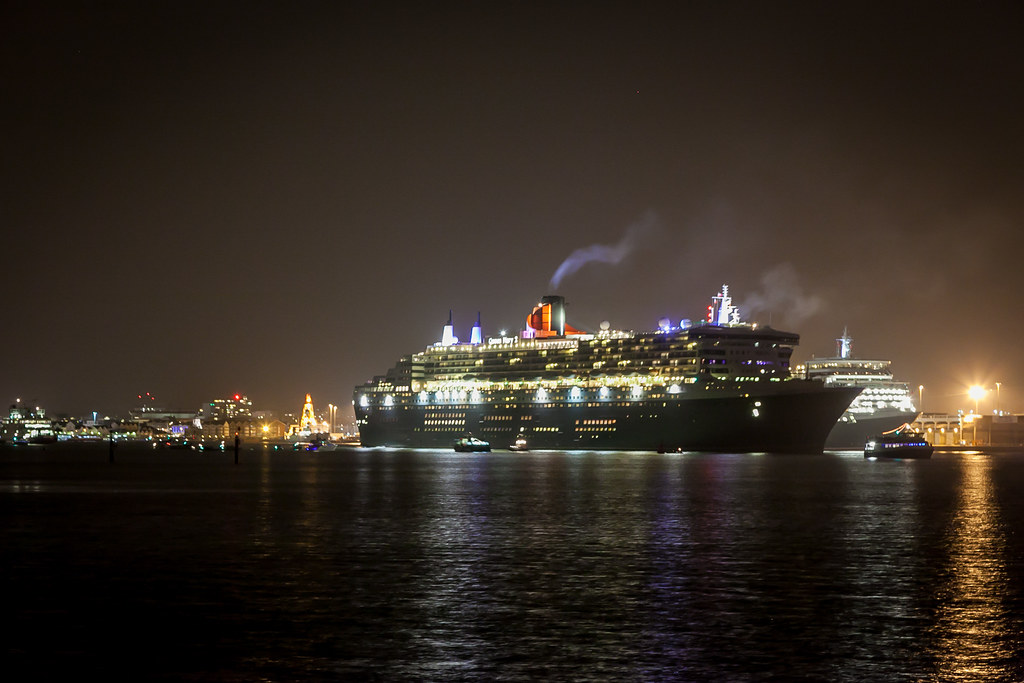 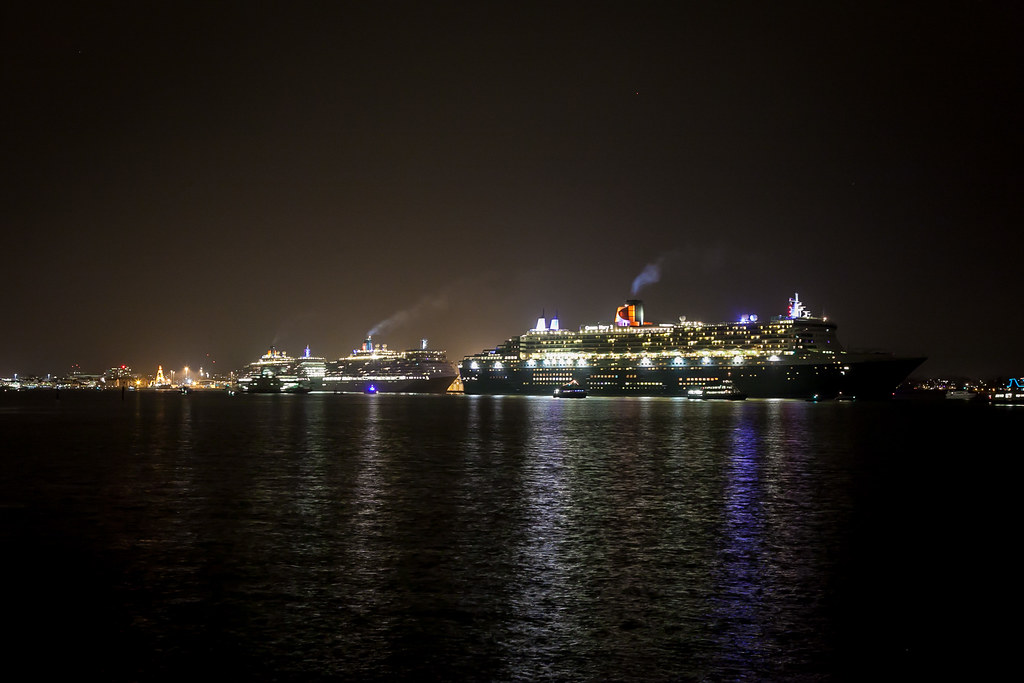 Queens of the Night

If you’re within reach of Southampton and enjoy maritime photography, keep an eye on ABP’s Live shipping movements pages. You’ll find details there not just of cruise ship movements but also of mercantile traffic. With ships leaving for destinations such as Port Said Roads, Baltimore, Panama and Singapore, it’s a reminder of just how trade really does connect Hampshire with the rest of the world.

Did you see – or even just hear – the ships on Friday night? Have you sailed on them before? Do you have memories of older Cunard liners? I’d love to hear from you.