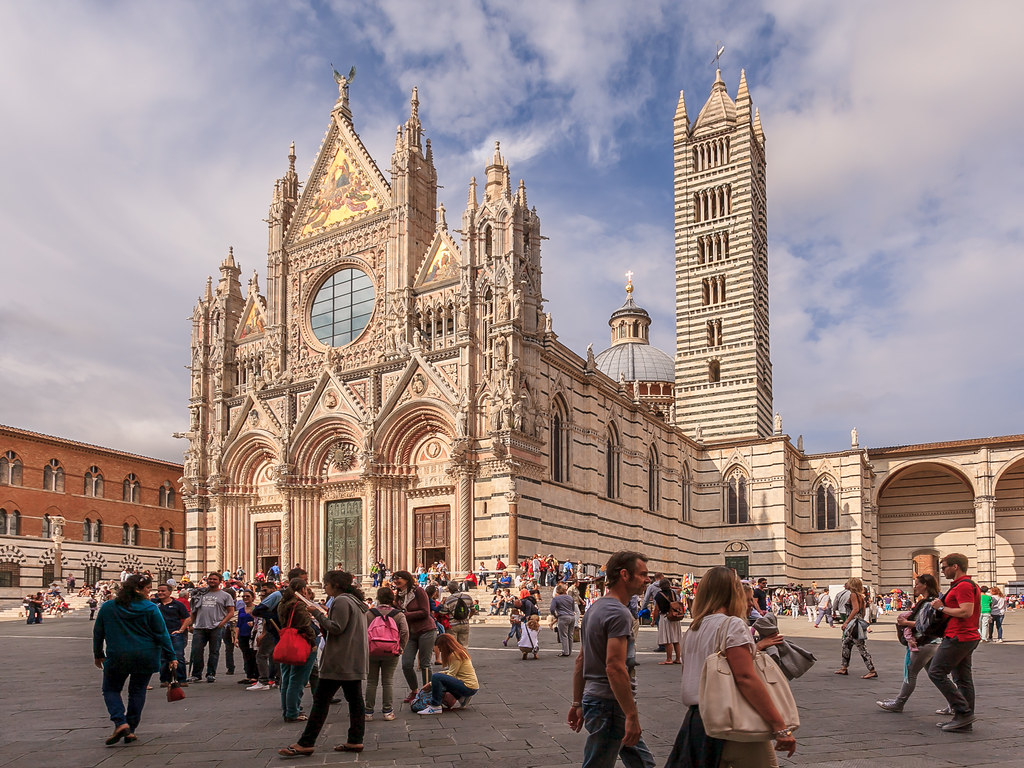 My first day trip from Pisa (we stayed at the Hotel San Ranieri) takes you to Siena, two hours away. Head east along the FiPiLi and, east of Empoli, turn south-east on the SP12 towards San Casciano – before joining the FiSi for the last stretch to Siena.

We parked at the Parconoleggio Sant Caterina on the Via Esterna di Fontebranda, about half a mile from the FiSi (Siena ovest exit). At €2/hr, it wasn’t cheap but just up the hill, we found a flight of half a dozen free escalators that took us virtually all the way to the top. This alone justifies the parking charge because Siena really is steep.

The two big draws for tourists – and the throngs of people coursing through every street and square showed their power when we visited – are the cathedral and the main square, the Piazza del Campo.

Since it looked to be the most cost-effective option, we bought OPA Sí Pass tickets that gave combined entry to the cathedral, crypt, baptistery, museum and ramparts – for €12 each. As it turned out, however, we didn’t see the latter three because, having arrived mid-afternoon and spent so long in the cathedral and paid a visit to the crypt, we found they had just closed. We’d therefore recommend beginning your tour just after lunch in order to fit everything in.

Begun in the 12th Century, Siena cathedral is one of the crowning glories of Church architecture. Its carved marble west front, construction of which was overseen by Giovanni Pisano in the 13th Century, is breathtaking. Inside, the black and white marble columns that support the colourful vaulted ceiling, the flamboyantly gilded underside of the dome that crowns the crossing and the ornate fresco floor combine to make it quite unlike any provincial English cathedral.

The crowds you get in Siena are comparable to those you’d encounter in, say, Salisbury, although they did thin out as the afternoon wore on. With the emphasis on tourism, there is precious little sign that the cathedral is actively used for worship. This is a pity.

Towards the end of  our visit to the cathedral, we heard a drum being struck very loudly and found a troop of children practising for some kind of procession, possibly related to the Tabernacoli festival a few days later. They lent some local colour to our visit.

From there we walked the short distance to the Piazza del Campo and splashed out on a light supper at one of the restaurants around its perimeter. At €32 for two pizzas and two orange juices, it wasn’t cheap – we overheard the man at the table behind us complaining loudly about the price of drinks on his bill – but you are really paying for the view and the atmosphere. As American Express would have it, watching twilight overtake the Torre del Mangia and the Palazzo Pubblico was…priceless.

Do you have any travel tips about visiting Siena (I recently shared advice driving in Italy!). Let’s continue the conversation in the Comments below. I’d also be very grateful if you’d share this post via your social networks.